Overview: Reproduces tastes and smells at sensory level via signal sent from the plate and glass to the microchip head patch, making dieting enjoyable

What’s This: ”SET TO MIMIC”, including a plate, a glass and the microchip head patch, is designed to recreate at sensory level, familiar tastes and smells, thus making healthy eating and drinking more enjoyable. Both plate and glass have matter detector bands, which enable the integrated computer system to recognize the content and display it on the touchscreen. The consumer will place the patch on his head, choose from a list of products the one to mimic, and start eating/drinking whatever he initially put on the plate/in the glass. The microchip receives wireless information from the plate/glass and interact with brain cells to make the brain remember tastes and smells, suggesting that it is eating something else. The body will be fed with healthy foods, but maybe not that tasty and the mind with whatever the consumer wishes, minus the additives and excess sugar. The computer can also save new tastes and smells to mimic, by setting the patch to send information to the plate/glass.

The Push: A busy and chaotic lifestyle can make eatingh healthy and staying in shape almost impossible. ”SET TO MIMIC” is a product that adresses people who can’t keep a diet, overweight people with diabetus or even people who don’t have the time or means to cook an elaborate meal, but still want to enjoy the taste and smell of comforting foods and baverages. By ”fooling” the brain, the consumer will eat healthier, be able to maintain a diet by removing additives, sugar, alcohol and nurish the body right. 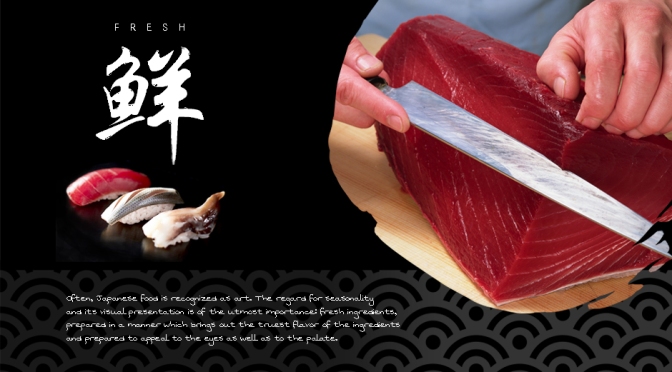 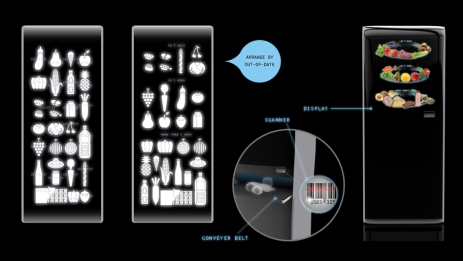 What’s This: The concept was inspired by the Japanese cuisine. It is always recognized as art. The regard for seasonality is of the utmost essence, by using fresh ingredients and preparing them in a manner, which brings out the truest flavor of the ingredients. The concept of my design is to keep every food in our daily life being fresh before it reaches the tongue. The Fresh concept also fulfills our needs on having a healthy lifestyle.

The idea is to change the old behavior. In my design, the user does not need to open the door of fridge nor see the items inside. The door of fridge will be replaced by a full-size digital display and all the contained items are presented on it. Items are ascending sorted by the best-before date and displayed as three levels. The input and output of items are through a conveyer belt placed in the front-center of the fridge. If any food turn out-of-date, notifications will be sent to the user and the food will be sent out from the fridge automatically.

The Push: The motivation is to encourage people to consume all the food before out-of-date. Imagine a traditional scenario in using fridge, the user keep putting new items onto the shelves in the fridge, and the former items are pushed to the back and blocked by new. Because the former items are not as visible as newer items, they are more inclined to be ignored and forgotten in the fridge’s corner and being rotten, which always lead to waste of food or food poisoning if people eat them by mistake. 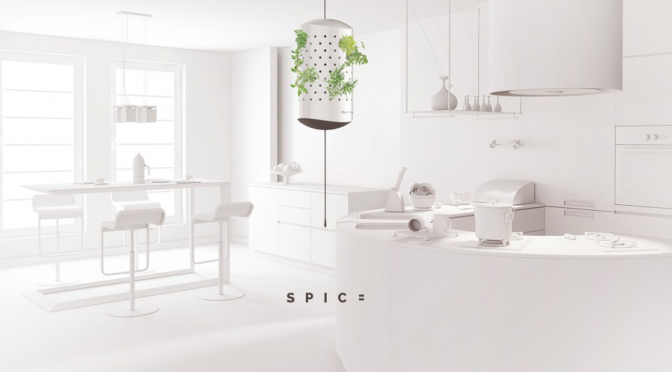 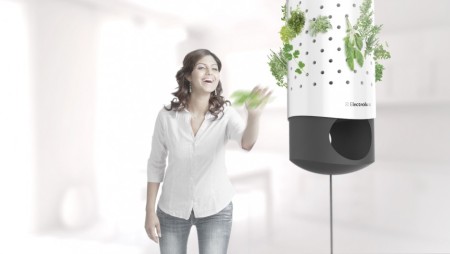 Overview: What makes your healthy home even healthier is your attitude.

What’s This: Following the current trends, the future technological products take all works from us. It results directly in a dystopia, in which the consumers discharge their duties from an sofa. The intelligent character of the SPIC= lies in the fact that it does not serve the comfort but the conscious lifestyle.
Among the characteristics of the lifestyle, the nourishment has the most important influence on the balance of our body. It uses the well-known, but disregarded fundamental truth that all the health problems of humanity can be cured by some of the Earth’s plants.
The SPIC= is a smart, natural biosphere whose functioning depends on a composting system, therefore the cycle of domestic waste solves the provision of nutrients and the energy supply.

The Push: Spice = Medicine
Make your own biosphere that evolves according to the needs of your organism. Cook and start enjoying life. In a healthiest home, it’s your environment that helps you to get conscious. The SPIC= is a smart plant growth incubator that seizes the opportunities created by Mother Nature, which are the curative effects of the Earth’s herbs.
You provide it with information in everyday use, thus it responds to both known and unknown needs of your body with dozens of recipes. 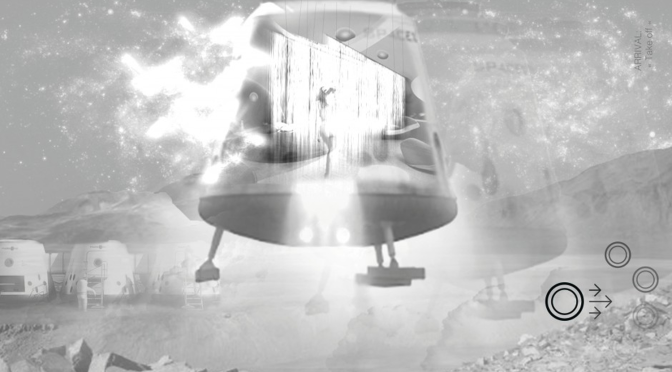 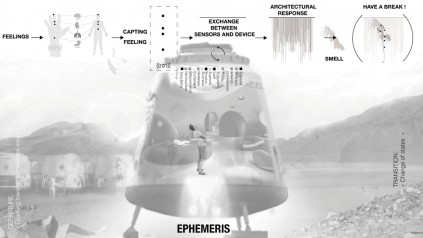 Overview: Ephemeris, nano filaments that adapt over time and feelings.

What’s This: In the year 2024, 24 earthlings will settle on Mars as part of a mission called MARS ONE. Life in a reconstituted eco-sphere, a limited and slight area is closer than we think. The concept of “home” will radically change. Between intimacy and community life, relations will change. Changes of mood and humor will have a bigger impact for each other. Could air counter-balance space sickness ? Could scents in the way of Madeleine de Proust allow to respond to a state of soul and spirit ? The device consists of the interaction between a sensor of emotion particular to the consumer, and an object generating space in response to it. During the use of this device, the emotional data is read and activates the deployment of nano filaments. It cleans the air as the consumer comes through. Thanks to the friction and the electromagnetism of filaments, the consumer is physically washed while the dissemination of scents through the filaments soothes the psyche.

The Push:The device integrated into a living space can be seen as an aside in a day. Consumer can relax and reach the notion of pleasure within a few minutes through this new space. The device is present but discreet, evolutionary and activated only in the goodwill of the consumer. Senses are disturbed, smell is tested and touched. Feelings of “déjà vu” will be initiated by the experiment, a daily ritual such as daily grooming: washing one’s troubles away. 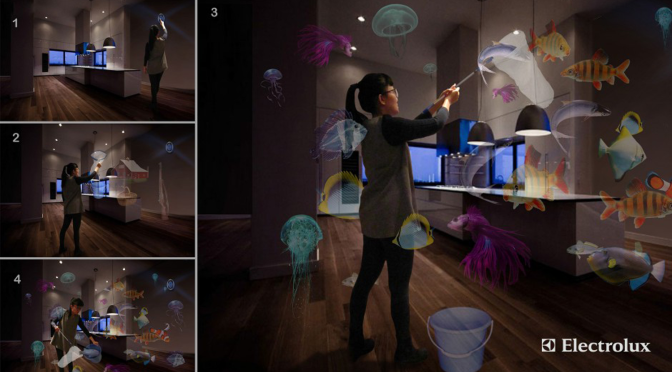 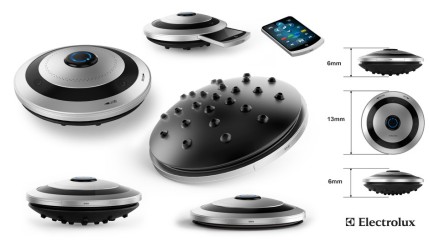 What’s This: The system works using holographic technology which projects an image of marine life into the kitchen which the user catches using a net and drops into a projected container. This symbolic act results in fresh food being ordered from local food markets and delivered to the home. New enjoyment can be found in a clearer understanding of the origin of the things we eat. Purchasing food in this way also gives new emphasis on buying from local farms and markets, assuring that food is fresh. It is a system that promotes healthy lifestyles through entertainment

The Push: “Future hunter-gatherer” is a future food ingredients collection system which aims to simplify complex ingredient sourcing networks. It offers an enjoyable way of bringing people closer to nature and the food they eat. By simulating nature, and specifically use Holographic Laser Projection to restore traditional hunter-gatherer scenarios like hunting and fishing, it brings a new level of engagement which has been lost in modern times. 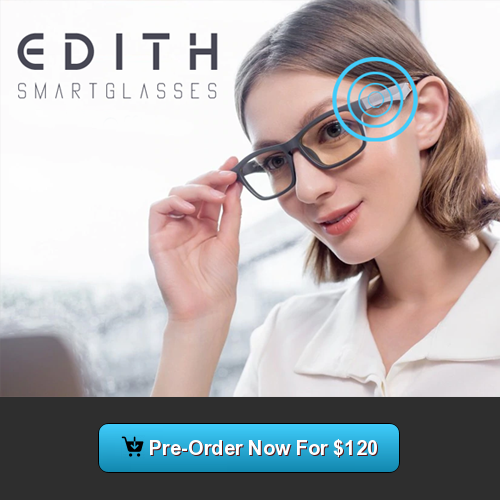 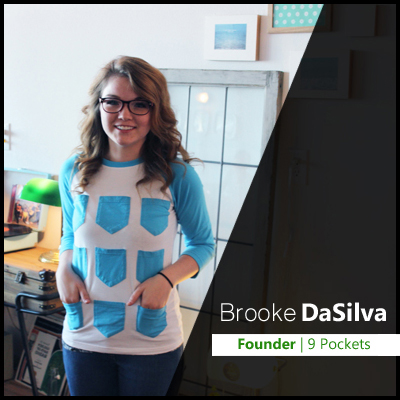 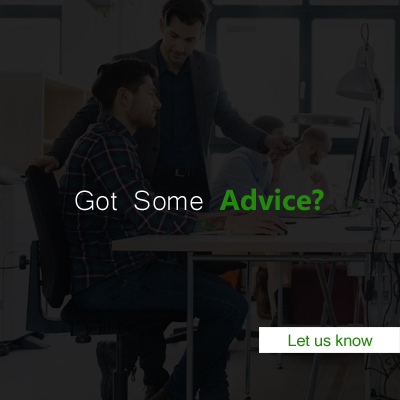